Summer is a great time to scope out a hunting and recreational property to enjoy year-round.  We have a large selection of property in many Oklahoma Counties, including land near the Ouachita National Forest.  Pictured below is one of them, 640 Acres with the historic Kiamichi Trail – an old Indian trail- running through it!  Here’s a little history about the name Kiamichi: 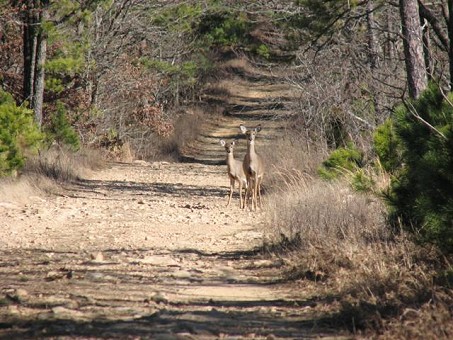 “In the early days the chiefs of the Choctaw
Indians were very
zealous to prevent whiskey being brought into the nation. The only
place where it could be obtained was across Red
River in Texas, and
the young men of the tribe who were desirous of
obtaining fire water
would ride down a well-known trail which lead
along the river, now
known as Kiamichi, to its mouth, would cross
by ferry, or by fording
the river, and obtain their whiskey in Texas. On
returning home they
were often met by the LiJtht Horsemen, or
Choctaw police, who confiscated
the whiskey and executed judgment by the lash.
And this happened near the mouth of the river.
So that the young Choctaws spoke of the place
as Kiamichi, “The place where they took my
whisky. The name was afterward applied
to the river, and later to the mountain which
Banked the river on the south.”